The inhabitants of this region of Southern Africa would have been hard pressed to come up with a more suitable name for the landscape. Namibia is like a diamond in the rough – it is only on closer inspection that its purity and multifaceted beauty is revealed.

Many visitors who have experienced this landscape have become obsessed by it, determined to see more of it and comprehend its allure. Space sets Namibia apart. It is a country of epic landscapes and cinematic beauty, spread across an area nearly twice the size of California but with only two million people. A population density of a mere seven people per square mile may contribute to the relaxed spirit. Namibia is a safari destination with a difference, famed for its remote and intimate lodges, in starkly beautiful places filled with fascinating desert-adapted wildlife. This is the world of the legendary desert elephant, whose very existence once appeared to be consigned to legend.

The Etosha Pan is host to one of the greatest wildlife spectaculars on earth. Namibia now boasts the largest free-roaming population of black rhinos and cheetahs in the world and is the only country with an expanding population of free-roaming lions. Namibia’s elephant population more than doubled between 1995 and 2008 from 7,500 to over 16,000 individuals. This remarkable turnaround has led some to call Namibia’s conservation efforts the greatest African wildlife recovery story ever told.

WINDHOEK
Windhoek is Namibia’s capital, home to an international airport and a plethora of restaurants, shops, entertainment venues and accommodation options. The city is clean, safe and well-organised, with a colonial legacy that is reflected in its many German eateries and shops, and the widespread use of the German language. Windhoek has an interesting mix of historical architecture and modern buildings, many of which are worth a look, including the Alte Feste (Old Fort), the 1896 Christuskirche (Christ Church) and the more contemporary Supreme Court. Don’t be surprised by Namibia’s friendly citizens, enthusiastic about entertaining their guests to ensure a great visit.  One of the most remarkable features of Windhoek are the mountains and hills that encircle the city. Standing 5,428 ft. above sea level, these peaks create breath taking views and are a site to be seen.

SWAKOPMUND
Swakopmund, Namibia’s second biggest town and traditional “summer capital,” is one of the most surreal and unique destinations in the country, central Europe meets the African desert. next to the ocean. Founded in 1892 as the main harbour for German South West Africa, Swakopmund is often described as being more German than Germany, with its quirky mix of German and Namibian influences and colonial-era buildings make it a fascinating destination. Just outside Swakopmund, a section of towering dunes have been set aside for a variety of adventure activities – sand boarding and skiing, quad biking, camel rides and off-road driving. Swakopmund also offers a host of other attractions, including boat trips to see dolphins and seals, shore-based angling, skin diving, surfing or just simply relaxing on the beach. Moreover, the town is surrounded by the Namib-Naukluft Park, one of the most bewitching desert wilderness areas in Africa.

SKELETON COAST
Known by the Bushmen as the ‘land God made in anger’ the Skeleton Coast is remoteness at its best. Thousands of miles of sandy desert, dotted with shipwrecks meet with the cold waters on the Atlantic and somehow an amazing array of wildlife and flora manages to survive in this harsh but beautiful environment.

SOSSUSVLEI
The iconic red sand dunes of Namibia!! One of the natural wonders of Africa.

THE NAMIB DESERT
The Namib is the world’s oldest desert, and although it stretches along the entire length of Namibia’s coastline, the Namib commonly refers to the vast sea of sand from Luderitz to Swakopmund. For a big sandy desert the scenery is remarkably varied, with the giant red dunes of Sossusvlei being the most famous part.
Because of how old it is, the Namib is home to numerous species that don’t occur elsewhere and an amazing array of flora and fauna manages to survive here. Famous species include the Welwitschia – a living fossil plant, endemic chameleons, fur seals along the coast, brown hyenas, jackals and remarkably, one of Africa’s largest antelope the Gemsbok. The name Namib is of Nama origin and means ‘vast place’ and vast it certainly is.

ETOSHA PAN
Etosha National Park is a place of extraordinary beauty and a Must See And Do for those who love wildlife and breathtaking landscapes. It’s a cliché, but Namibia’s Etosha National Park really is the crown jewel in a land rich with natural wonders. Consider the stats: an area of almost 23 000 sq km; 114 mammal species; 340 bird species; 86 waterholes (natural and man-made) and 3 551 km of roads. The Etosha Pan is nearly as big as Switzerland and large enough to be visible from space.
The San (Bushmen) people say the pan was created in the Dreamtime when a village was attacked by marauders and all the men were slain. The grief-stricken village women cried for so long, their tears formed a colossal lake. When it dried, only the salt from their tears remained.
Etosha has just about every African animal you could hope to see.

ONGAVA GAME RESERVE
Ongava is one of the largest and most exclusive games reserves in the southern part of Etosha National Park. It offers an authentic and comprehensive safari experience, including nature walks and game drives, as well as luxurious accommodation. The reserve is home to – among others – lion, eland, black-faced impala, Hartmann’s mountain zebra and a variety of other antelope species. It is also one of the few private reserves in South Africa where both black and white rhino can be observed. Birdlife is plentiful at the reserve, with over 340 species recorded in the area.

ONGUMA GAME RESERVE
Situated on the eastern side of Etosha, bordering Fisher’s Pan, Onguma Game Reserve is one of Namibia’s best kept secrets! Here you will be afforded the opportunity of experiencing Africa in all her beauty and diversity. Onguma Game Reserve has more than 34,000 hectares of protected land and wildlife.

Our nature reserve boasts over thirty different animal species consisting of plains game including kudu, giraffe, The latest addition to the already abundant wildlife at Onguma Game Reserve is a family of black rhinos! More than 300 bird species can also be viewed at Onguma Game Reserve. During the Namibian summer months the nature reserve becomes a bird-watcher’s paradise with thousands of species migrating to the wetlands created by the seasonal rains and river systems.

DAMARALAND
Huge, untamed and ruggedly beautiful Damaraland is an exceptionally scenic landscape of open plains and spectacular rock formations. The major attractions are Spitzkoppe, the Brandberg, Twyfelfontein, Vingerklip and the Petrified Forest.

Damaraland is considered one of the most interesting and beautiful areas of Namibia.  It has several endangered desert-adapted species such as the rare desert elephant.  The hunting of wildlife in this area threatens to push populations down to risky levels  Ecotourism projects  have created a viable alternative by providing benefits to the local communities by making them active partners in the management of Damaraland. So far, the management plan for Damaraland has led to increases in the numbers of desert animals. Bird life is concentrated mostly along the dry river beds, but can be quite prolific here as well.

In addition to the rare mammals and birds you will see on game drives through the desert, southern Damaraland boasts a wealth of anthropological and geological wonders. Strewn over a hillside at Twyfelfontein in the southern Kaokoveld, boulders and slabs of red sandstone hold some 2,500 prehistoric engravings that depict wildlife, animal spoor and abstract motifs. The rounded hill south-west of the Petrified Forest, known as the Burnt Mountain, seems to catch fire at both sunrise and sunset. Its’ fantastic range of colors comes from a chemical reaction that took place 132 million years ago when molten lava penetrated shale and limestone deposits. In ordinary sunlight, it is a dull black with blackened rubble lying to one side, like cinders from the original fire.

CENTRAL NAMIBIA
The central Namibian highlands are much cooler and less harsh than the arid lowlands that make up the majority of the country. This is great cattle ranching country and most tourism facilities have their origins in cattle and more recently game ranching.

on your vacation and safari journey! 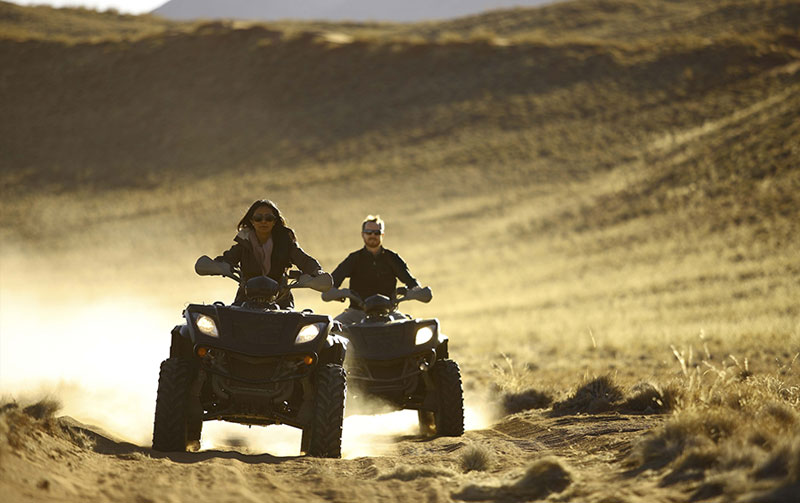 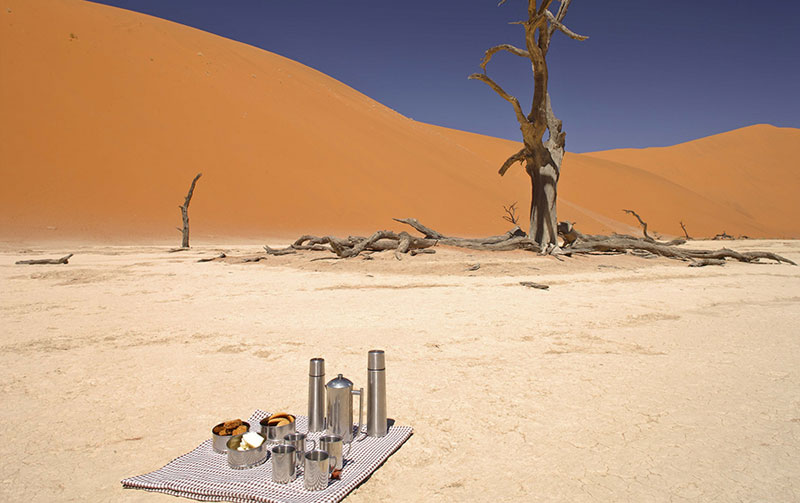 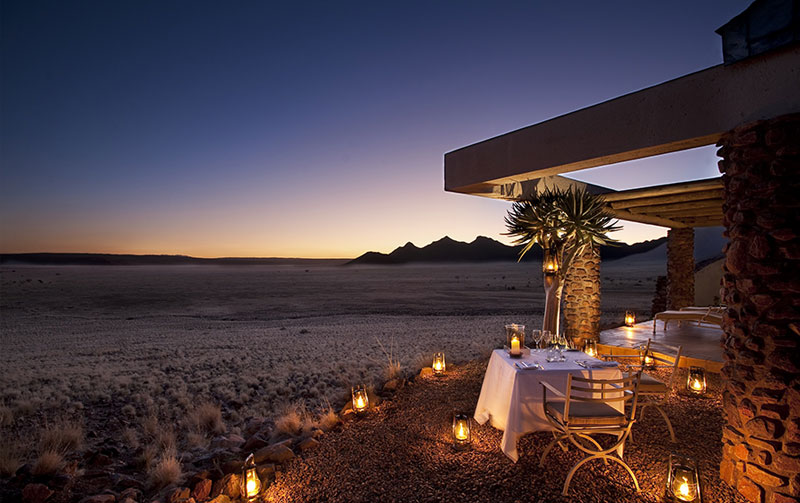 Let us craft the perfect Namibia experience for you.
ENQUIRE NOW
Enquire Now
×